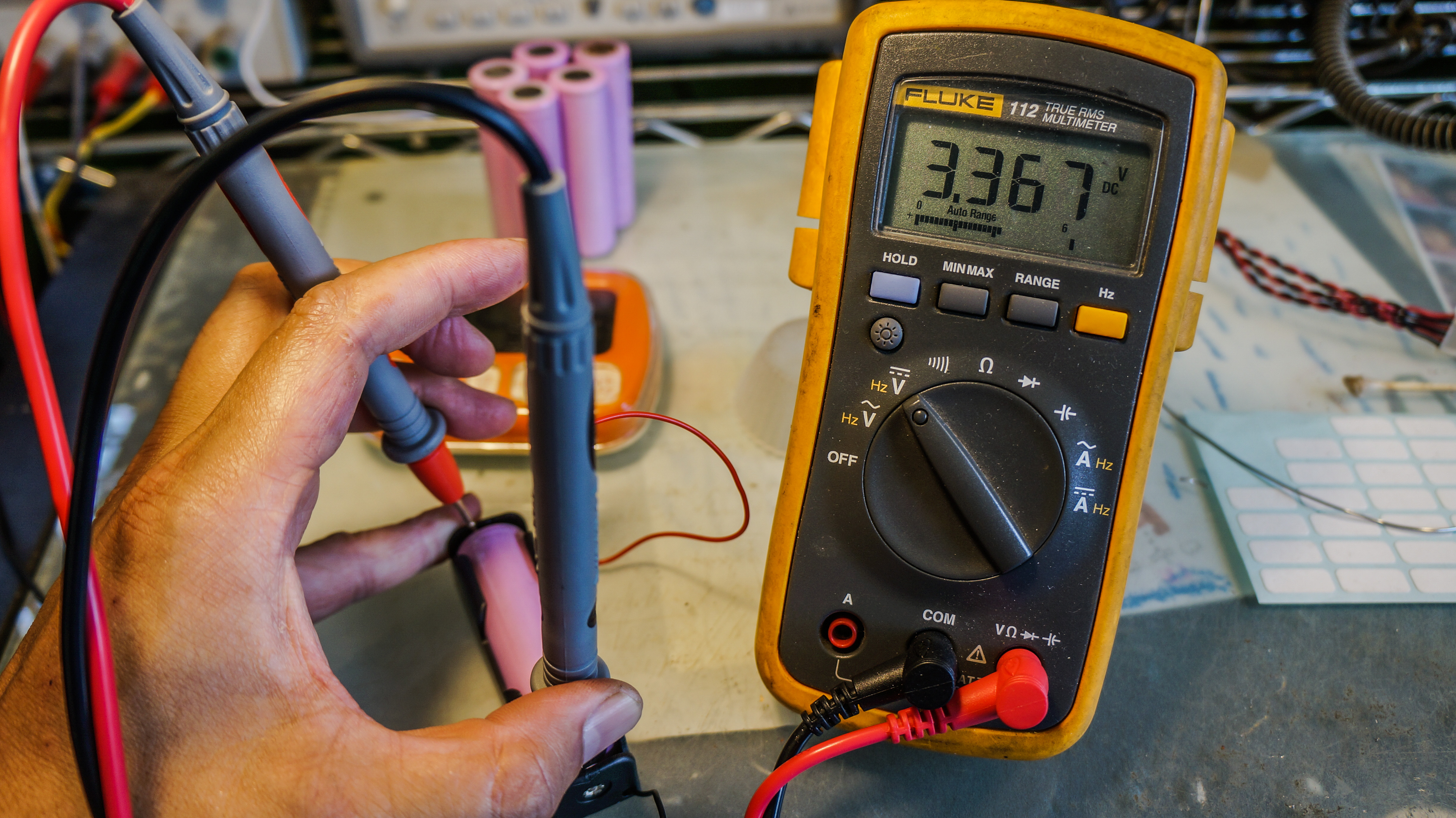 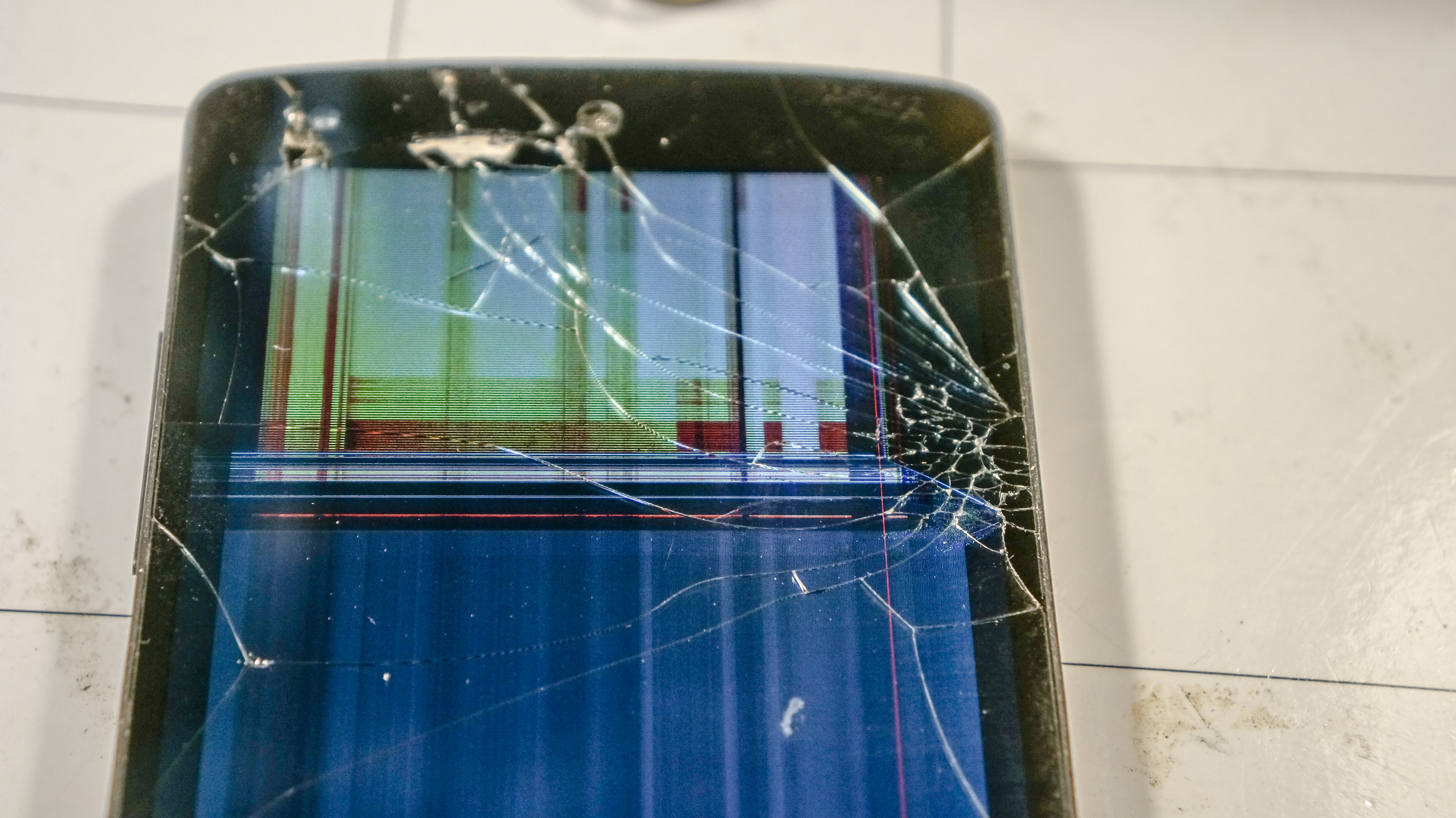 One of the most useful repairs I do is fixing phone screens. I break my phone screens all the time due to stupid things like dropping my phone, stepping on it, or having it bang around with something in my pocket. Fixing phones isn’t a trivial task since you have to deal with really small things like near-microscopic screws, tons of small parts, and really strong glue. Sometimes you have to pry parts off because the glue is so strong and you risk damaging the phone. However if you’re able to do it, it’s completely worth it to learn how to repair your phone of choice. You no longer need to be worried about dropping the phone or damaging the phone. A standard LCD+digitizer (front glass) assembly is around $20 which is the main cost of the repair. The rest is just fiddling around with the innards of your phone to move all the parts over to the new screen.

In this repair, I show how to replace the LCD + digitizer assembly for my Nexus 5 phone which just stopped working today. Luckily I had an extra screen lying around so I could do the repair the same day. Here is today’s patient. It’s an LG Nexus 5 with a bad crack and broken LCD. It was actually limping along for a few months but finally gave out today. I think I must have bumped it in a crucial area which rendered the LCD unusable. 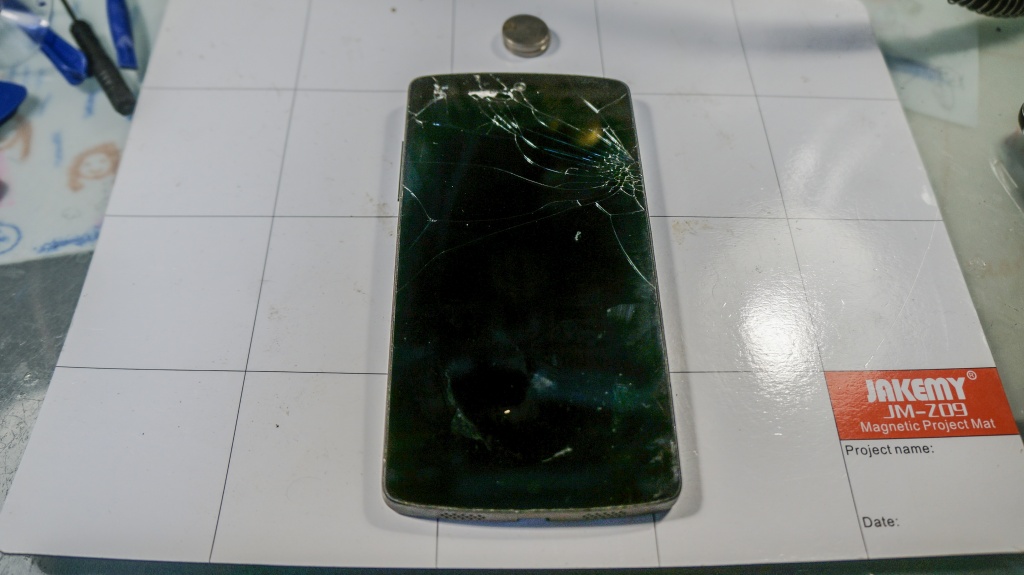 Here you can see that the LCD just outputs a bunch of gibberish. It’s completely unusable. 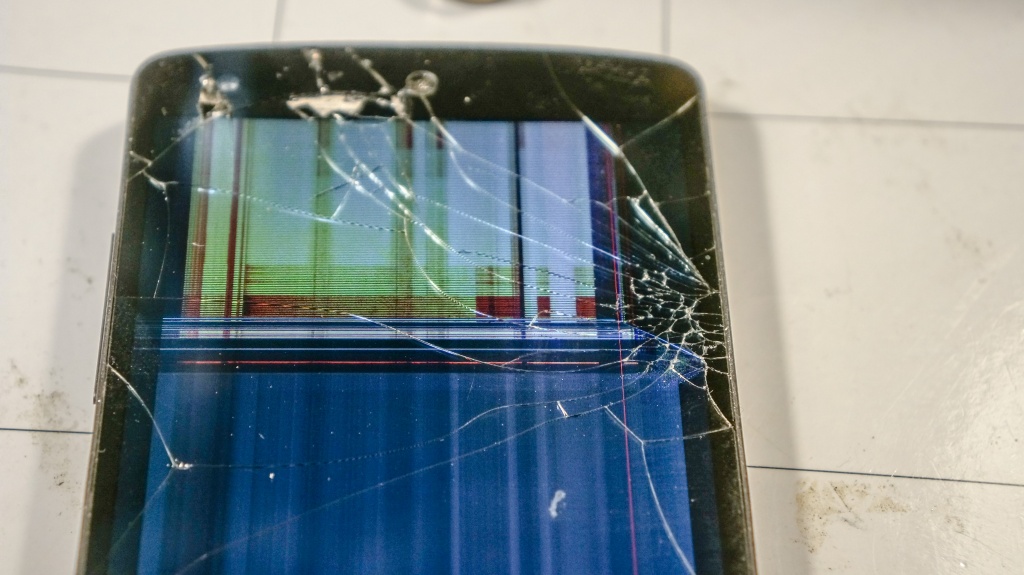 I start by taking off the back cover of the phone. For the Nexus 5, its quite easy and I can just pry it off with my fingernail. Once you have the back cover off, you can see that its possible to access the battery and other parts. I also change my battery on the Nexus 5 every year or so. New batteries cost about $10 and it breathes fresh life into the phone. You don’t have to run around with a mobile battery all the time. It’s surprising how quickly batteries get run down and lose their charging capacity. 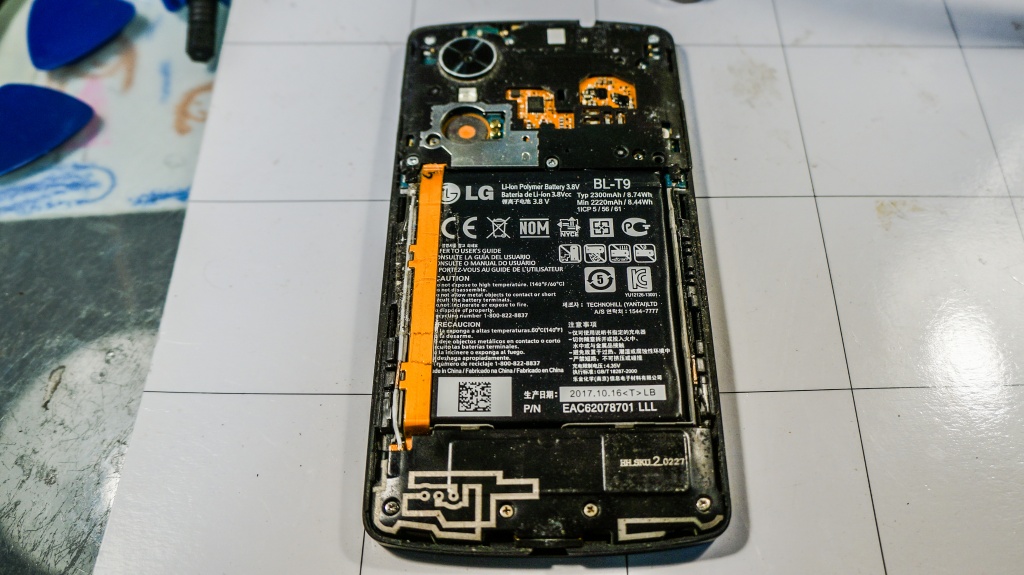 Now I’ve removed the top plate protecting the main circuit board. All the parts are exposed like the cameras, speaker, microphone, and antennas. Also, the screws are super tiny so you have to take extra precautions so that you don’t lose them. If you do repairs like this, I recommend getting a magnetic workpad specifically for mobile repairs. I also keep strong neodymium magnets on the workpad and put my screws on it. That way, I won’t lose a bunch of screws if I accidentally knock the pad since they’ll be stuck to the neodymium magnet. 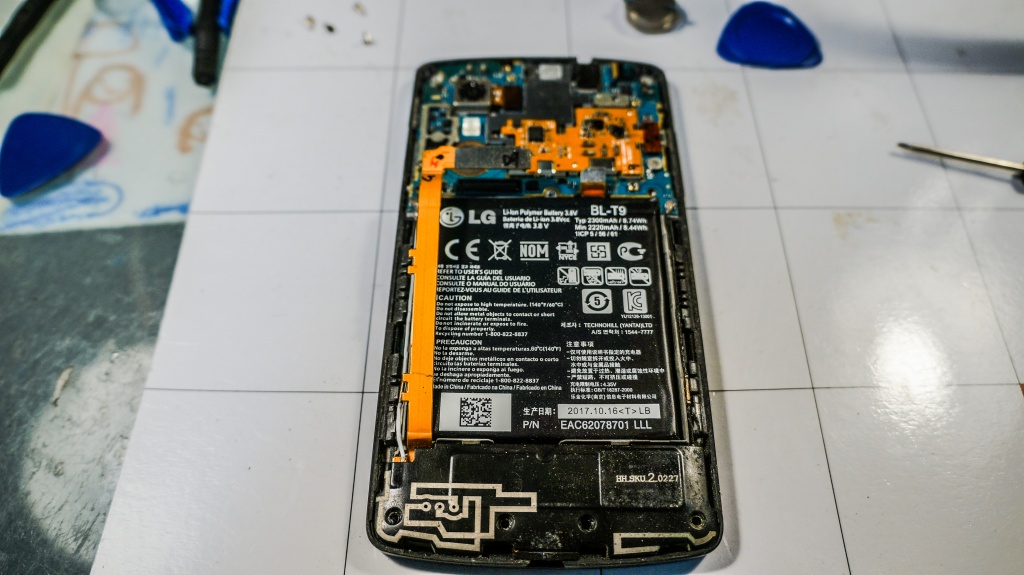 Took out the main logic board and most of the other parts. The front camera is still in there and the bottom logic board as well. 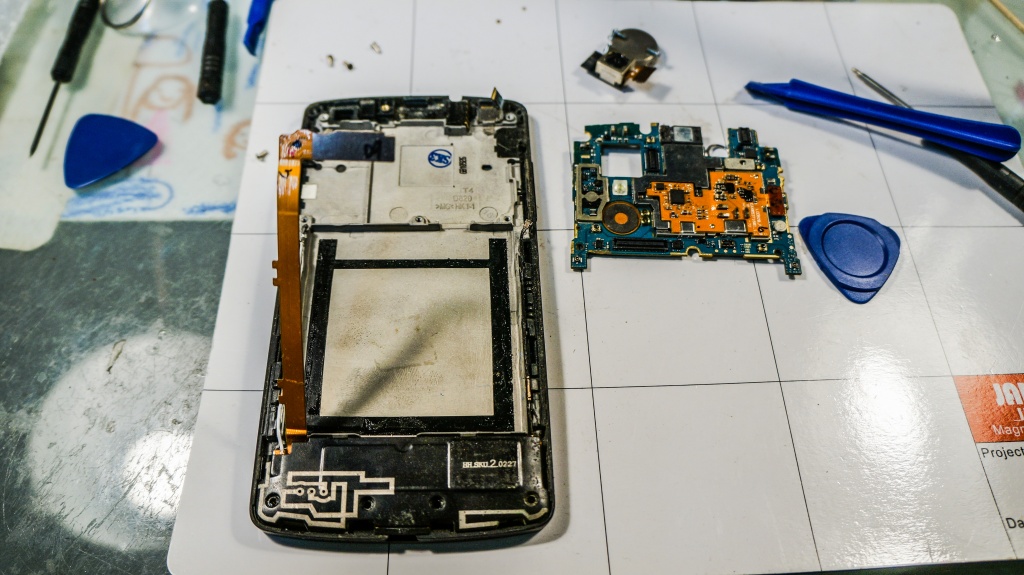 Now the complete assembly has been removed from the LCD. We’re ready to start transferring the parts over to the new screen. 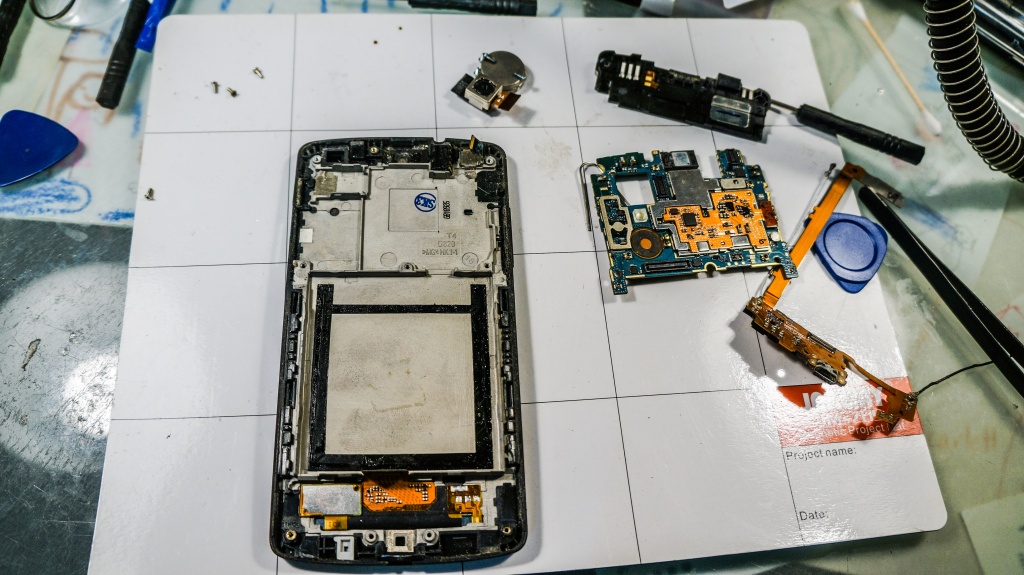 Here’s the new screen (left) with the old screen (right). The new screen also comes with new double sided tape to hold down all the parts. You have to peel off the blue areas to expose the tape. 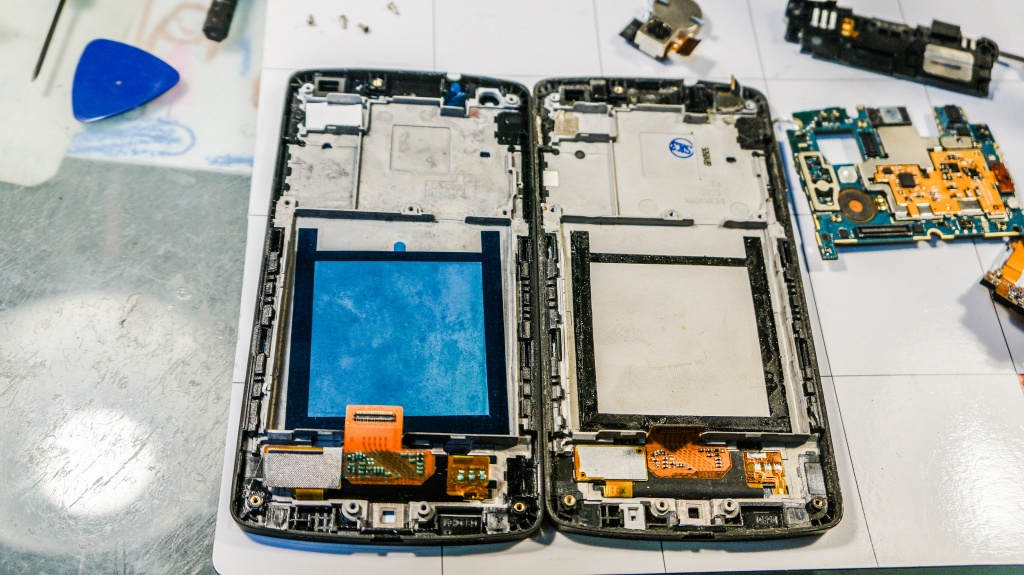 Added in the main logic board and cameras. Also had to add in the button switches on the side for main power and volume up/down. Those don’t come with the new screen. 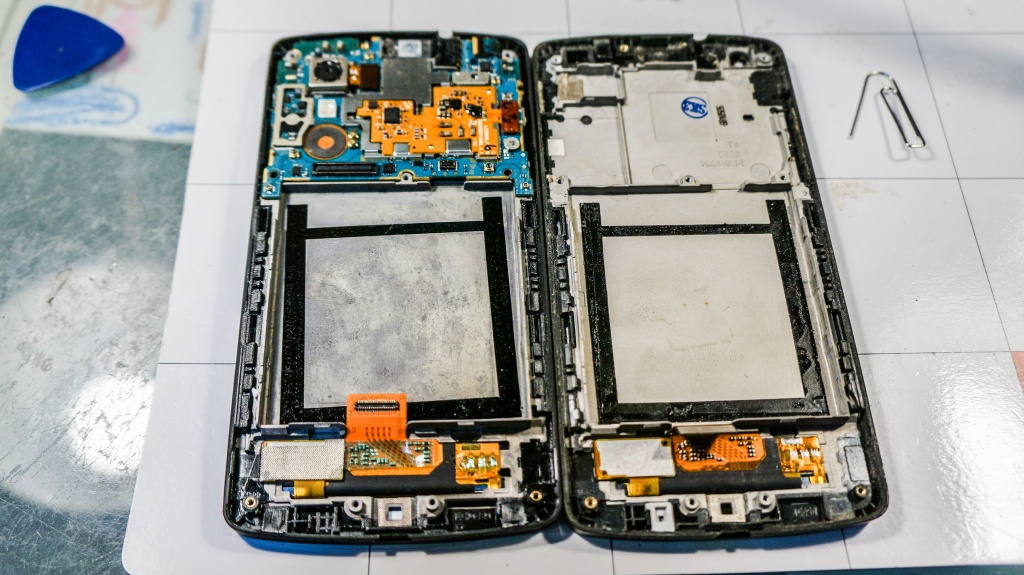 Bottom logic board has also been added, connected up the antennas, and put on all the protective plates. We’re pretty much ready to go now. 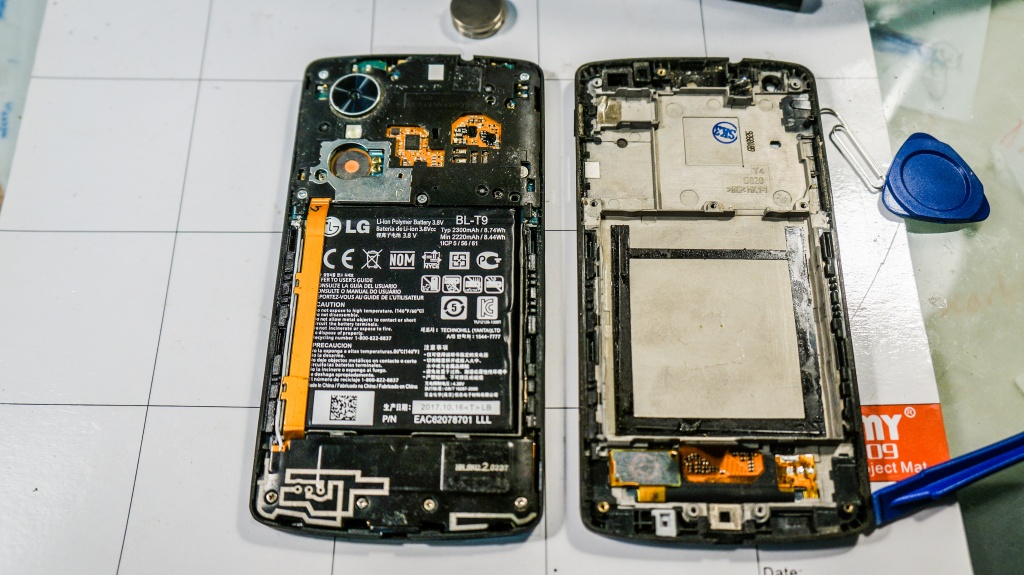 Finally closed up the whole phone and it’s ready to be powered up. You can see the old screen on the right is looking pretty sad. 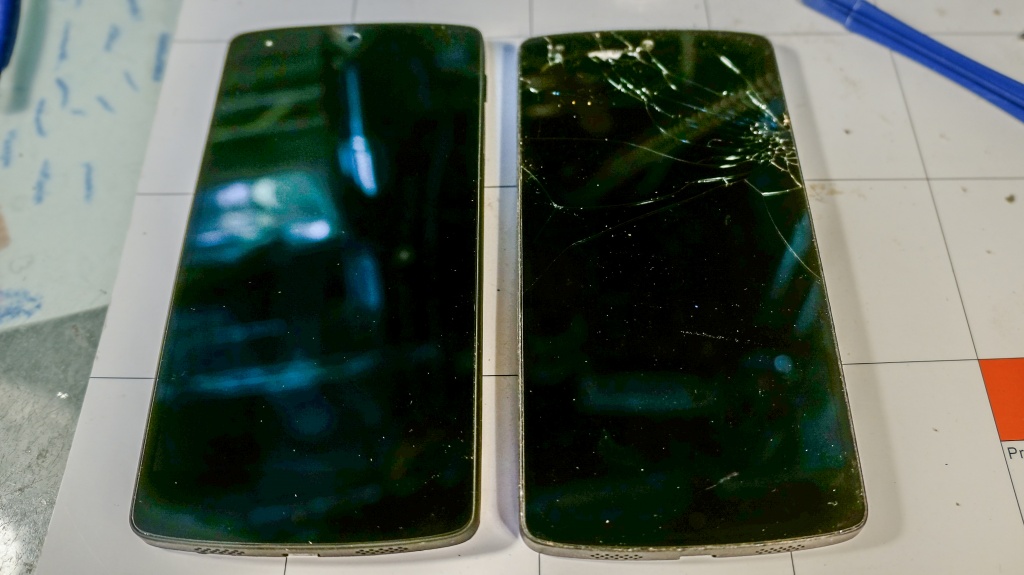 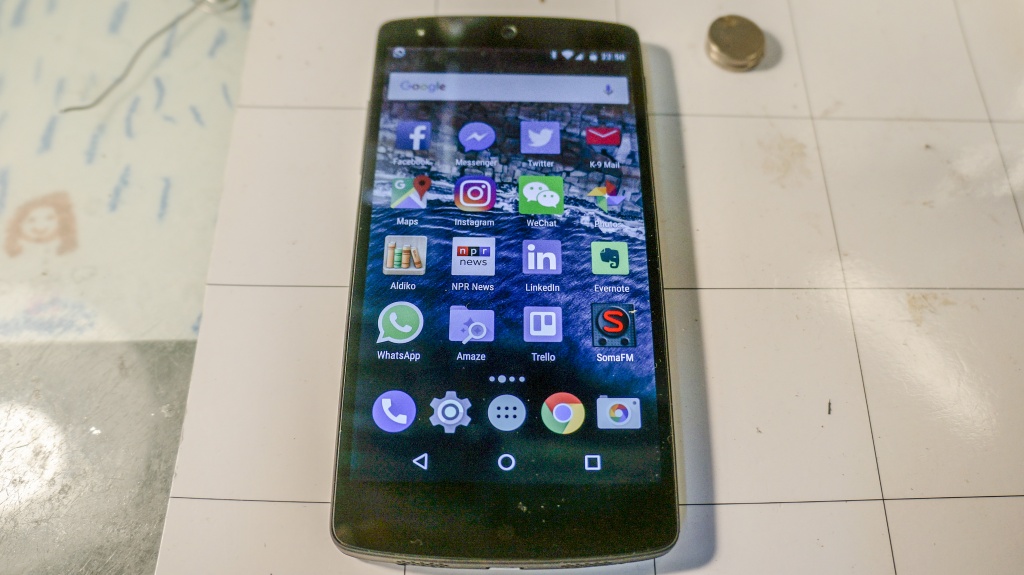 Like I said, phone repair, especially screen repair, is one of the best repair skills you can have. I never worry about dropping my phone and always keep a spare screen around in case something happens. Also, if something bad does happen, you can just throw on another screen and be up and running in an hour or two. This is especially important if you have a lot of contacts on your phone as well as crucial messages and information. 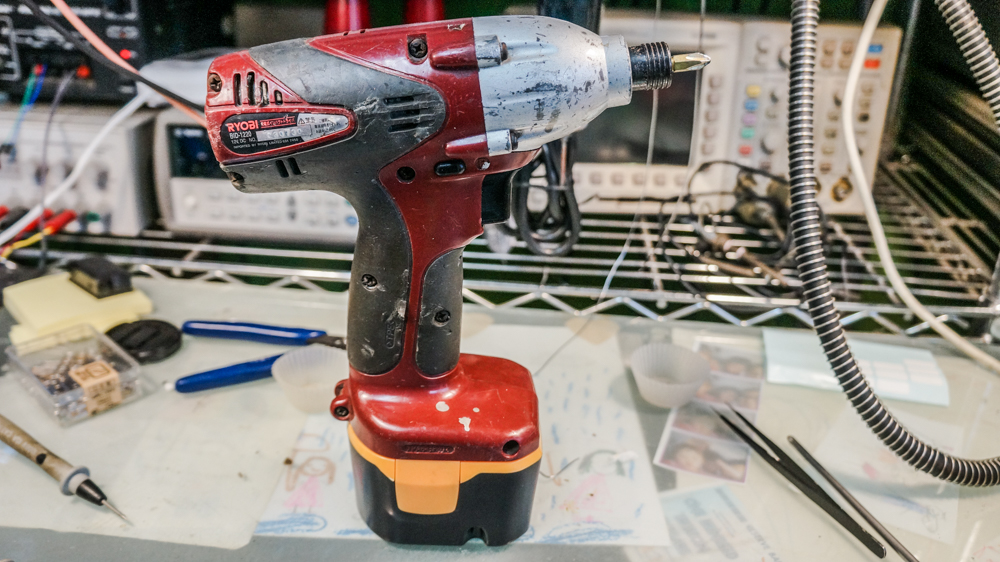 This is a new series we’ll be doing on the Hackerfarm website. Here at Hackerfarm, we’re constantly taking things apart to figure out how they work and how to fix them. We don’t have a lot of money so one of the techniques we employ is to buy broken items from Yahoo Auctions for super cheap and try to fix them. We do this for power tools, Dyson vacuum cleaners, and many other products that cost too much to afford new, but can be bought cheap as a “junk” device and repaired.

This Ryobi impact driver was one of the items we bought about four years ago to bolster our impact driver collection. We have to do a lot of carpentry out here to fix floors, houses, barns, and general renovation so impact drivers get a lot of usage. This particular one stopped working a while ago and we have some big jobs coming up to renovate a beautiful old house and barn. I wanted to get all of our impact drivers up and running with fresh batteries so we could get more people to help out with things. This is a Japan-only Ryobi model BID-1220. They were about 30,000 yen new but we picked a pair of them up without batteries for around 3,000 yen.

Here’s a shot of the pair of Ryobi impact drivers we picked up circa 2015 along with some drills. We standardized on this Ryobi series because they all used the same batteries. 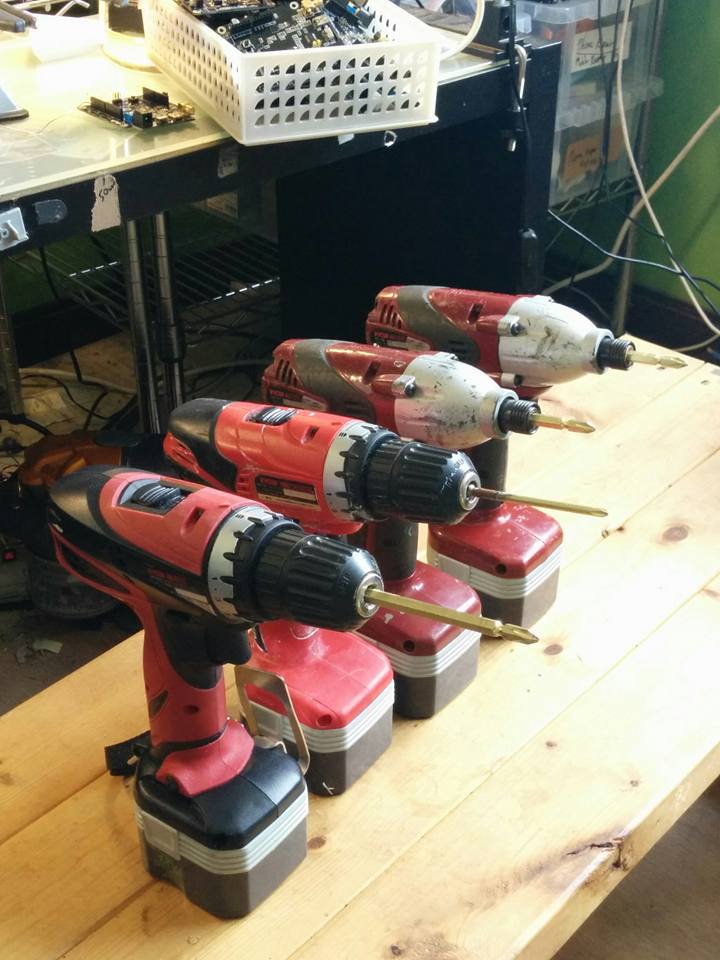 For batteries, we generally buy old battery packs, take them apart, and install fresh 18650 rechargeable batteries inside them. You can actually solder 18650s if you’re careful, so replacing them mainly consists of re-soldering the old wires on to new batteries. The reason we like old battery packs is that the circuitry inside is the most valuable part and handles the charge control and communicating with the chargers. The new 18650 batteries are about $1/cell in Shenzhen and we usually have a bunch of them lying around hackerfarm. We’ll do a battery teardown and replace in a later article. 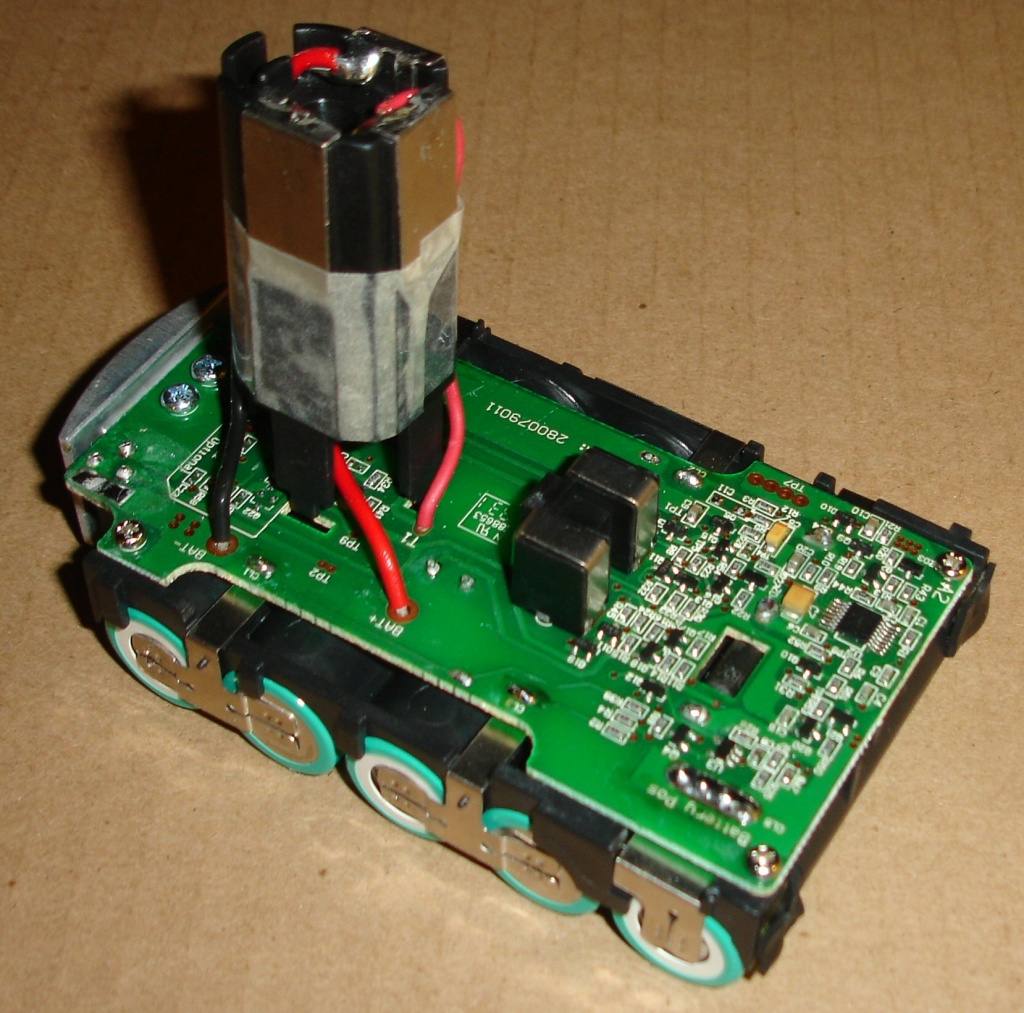 For this repair job, the Ryobi had stopped working, even with fresh batteries inside. I was worried that the motor burned out but since we didn’t use it for anything heavy duty recently, I didn’t think that was the case. It had been left on a shelf for a while because we haven’t done a floor since last year. Perhaps the humidity got to it. Anyways, it’s always best to take something apart to understand it.

Here is the problem impact driver. It’s sporting a freshly charged battery. You may notice that the battery isn’t a factory model. We also buy cheapy NiMH batteries from China when they’re available for the power tools we have. At this point the impact driver didn’t respond to pressing on the trigger. 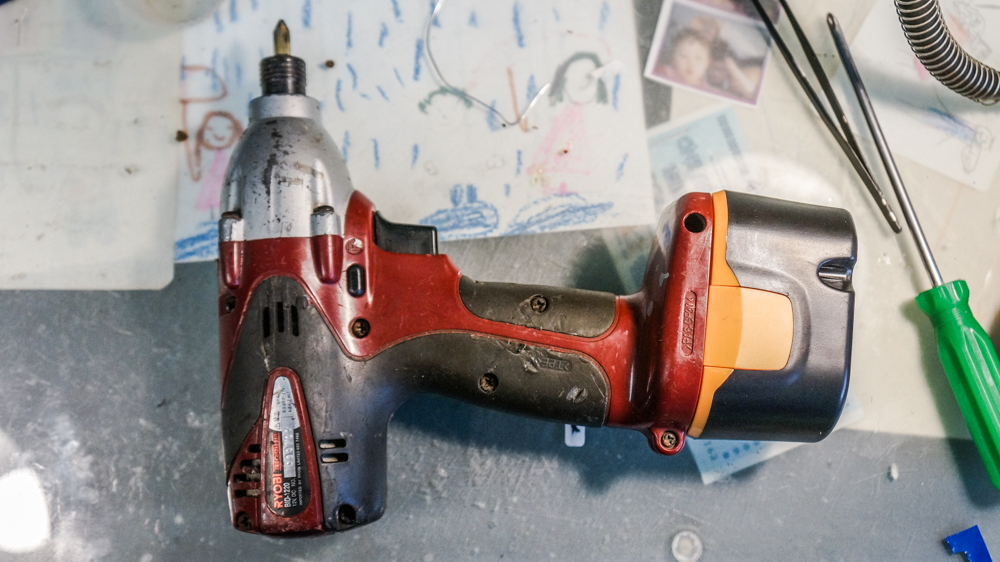 I pulled out all the screws so that I could take apart the handle. There is also a screw hidden in the base that’s recessed deeply inside a hole there. 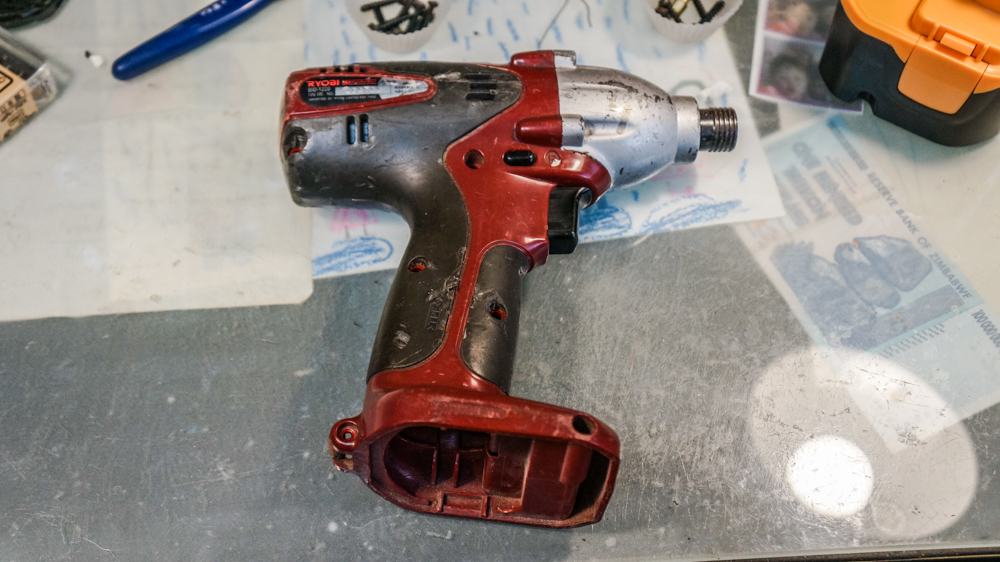 Before I could separate the handle, I found I had to remove the head first. There were four screws holding it in place. Once they came out, you could easily remove the head. This held the turning mechanism, gear reduction, and the weighted “impact hammer” that makes it so powerful. There was also a lot of grease on the gears. I can imagine that if the seal ever becomes bad, sawdust mixed with grease could cause a lot of problems for the drills. 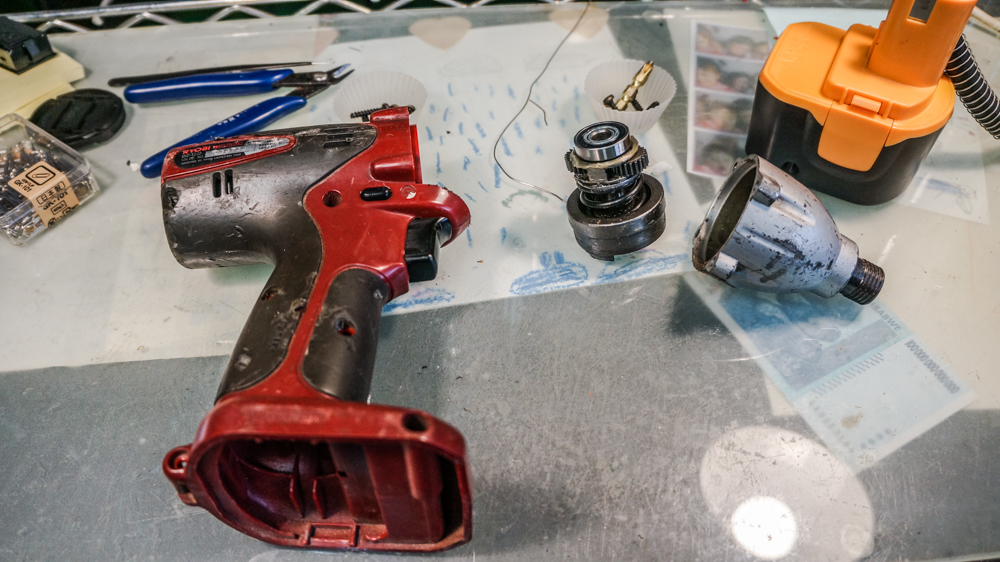 Once the head was removed, I used a screwdriver to pry open the two halves of the impact driver. There was a lot of dust and debris inside. The dust was a bit wet like a paste. Possibly, there was residual grease that sawdust mixed with. I had to blow on the trigger mechanism and area around it to clean out the debris. 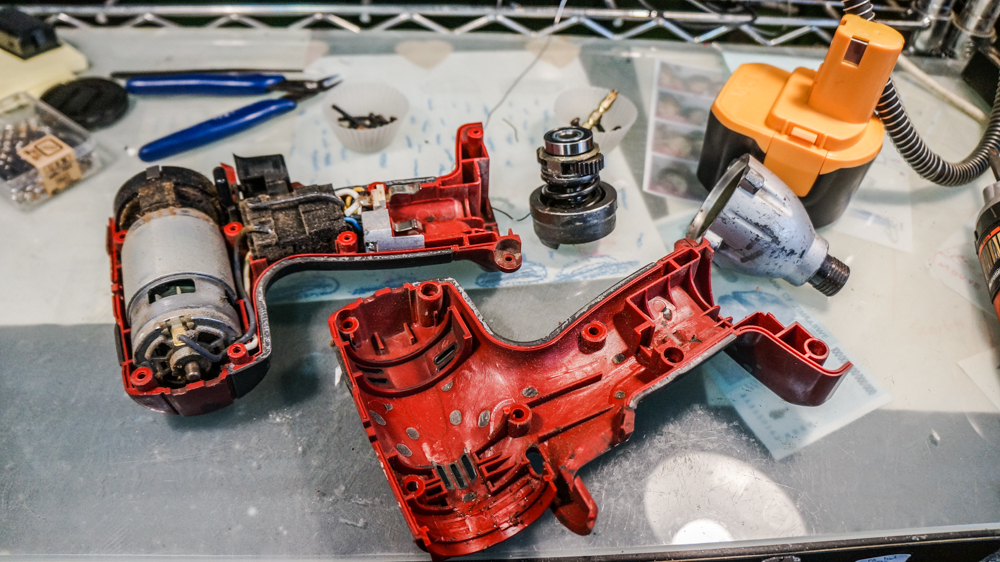 I plugged the battery directly into the trigger mechanism and measured the voltage. I had to be careful since plugging it in backwards could potentially damage the driver. On the other hand, it might just make the motor go in reverse. Ha ha ha.

Finally I got it to work. The problem was oxidation and debris on the battery contacts. After scraping it a bit, I could get the motor to turn. 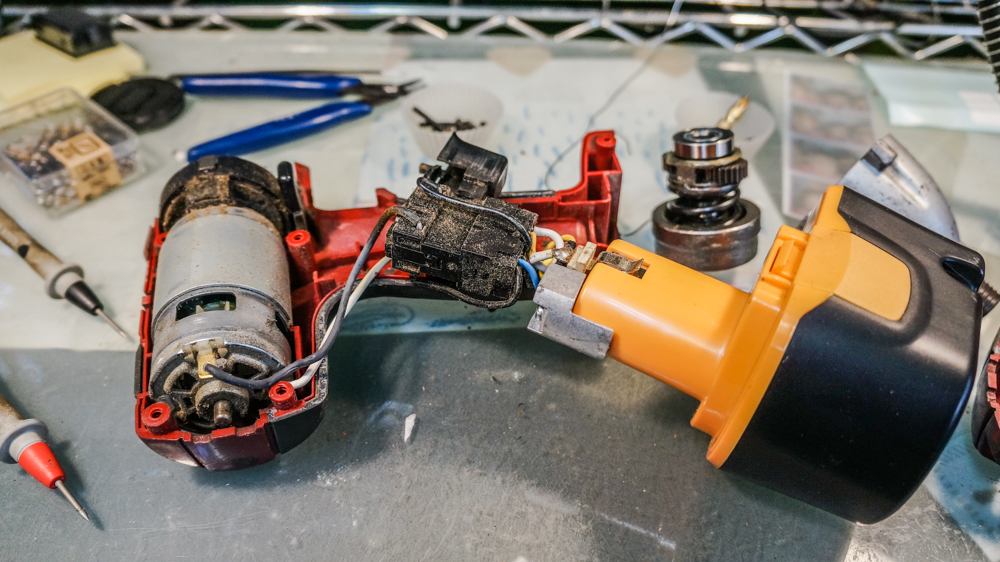 Closing up the impact driver was pretty straightforward. It’s almost all motor and just has the trigger switch and contacts to the battery. I did need to be careful with putting the wiring back into the wire guides to make sure it would close up properly though. 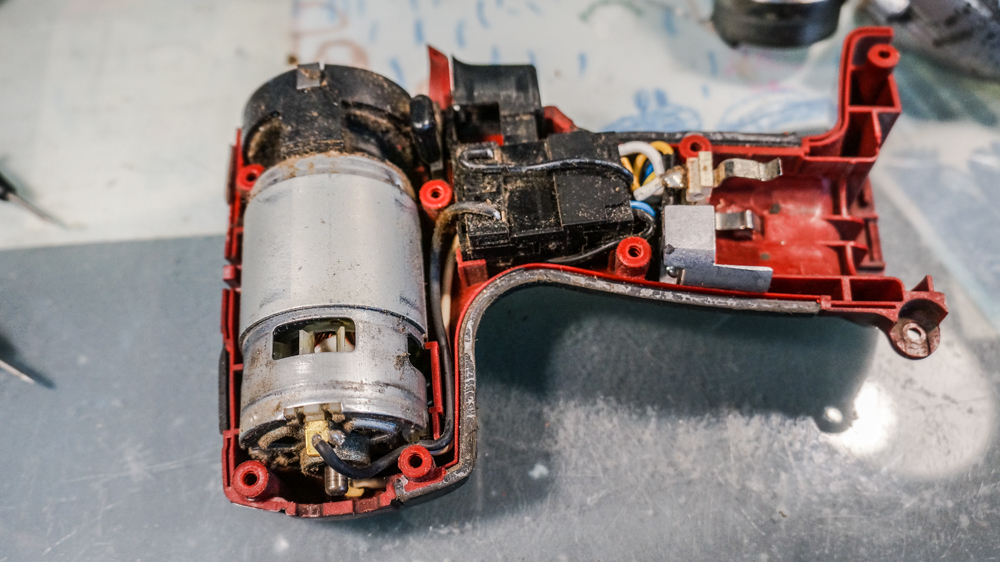 Impact driver as good as new. Luckily, this was an easy fix.

Yay! We could salvage the tool which will be a huge help. We will be rebuilding a bunch of floors soon on a house that Jacinta and I will be moving into. That’s part of a different story though 🙂