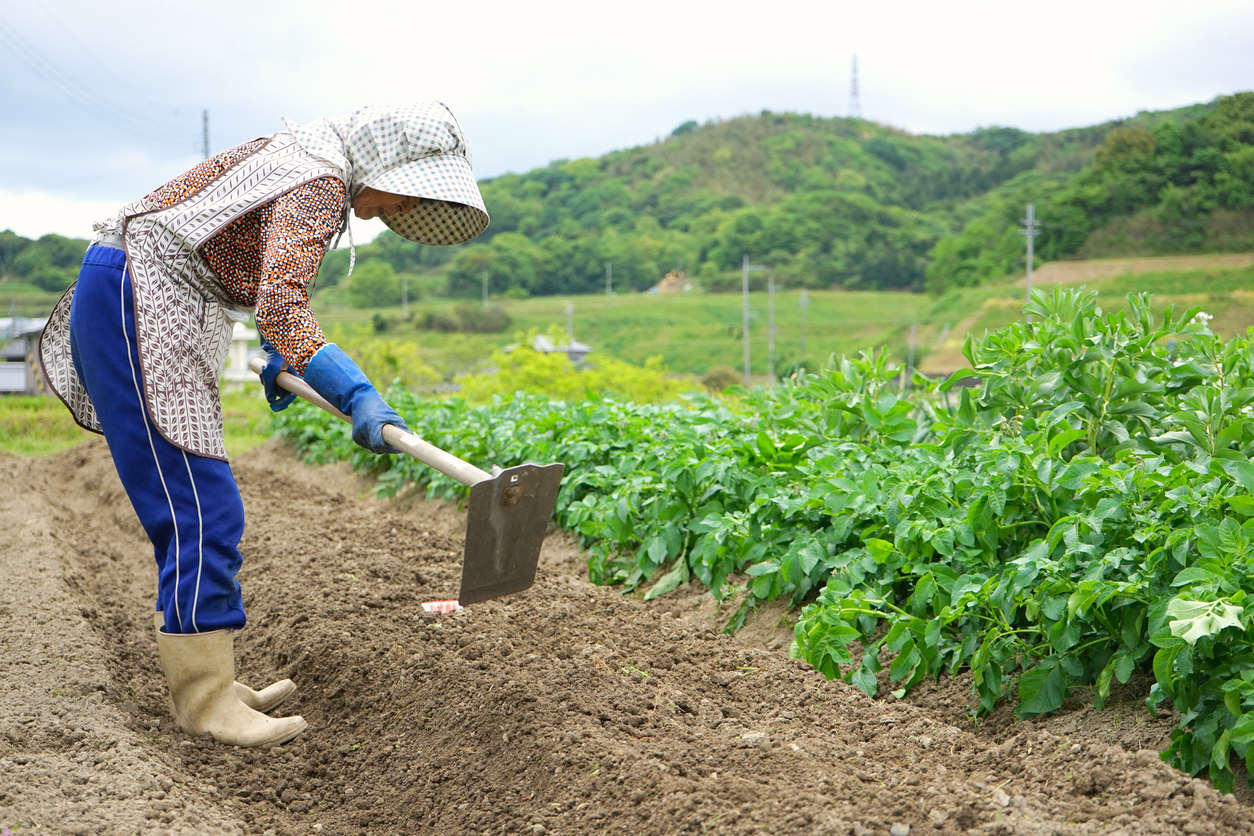 Imagine walking down the fresh produce aisle of a Japanese supermarket, past the potatoes, past the carrots, and to the cabbage. They’re perfect heads of cabbage beautifully on display for 156 yen. Nowhere is there any indication of who grew it, how it got there, or how they came to that price for a head of cabbage. For most consumers in Japan, the food system is opaque, where you only see the beautiful produce on display but don’t get to see what goes on behind the curtain. There’s a huge complex mechanism with many moving parts that goes on to bring your fresh vegetables from the farmers’ fields to the grocery shelves.

Within that ecosystem, the cost to produce the cabbage is about 38 yen, the amount the farmer gets from the sale is about 29 yen, and everything else goes towards providing the infrastructure to bring that head of cabbage to the consumer. 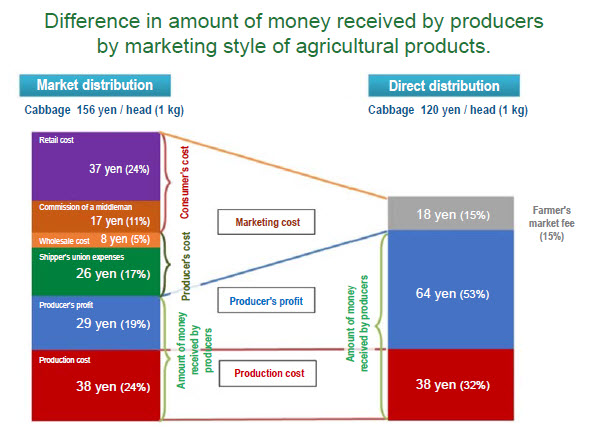 Source: Ministry of Agriculture, Forestry, and Fisheries, Summary of the Annual Report on Food, Agriculture and Rural Areas in Japan

Recently, there’s a lot of hype around agriculture technology with companies talking about ag-robots, IoT, self-driving tractors, etc. but nobody is really talking much about the larger ecosystem surrounding our food. In this first article in the series, we’re going to be taking a look at food distribution chains, and more specifically, Japan since this is where Hackerfarm is based.

If you look at the problems in Japanese agriculture, the high retail prices aren’t necessarily due to low farming efficiencies and farming methods. Ultimately, the main goal of any farming initiative is to improve the financial sustainability of the farmer. Improving the efficiency using technology may decrease the cost of labor, but if you really want to have an impact on Japanese agriculture, we should really look at…the Food Chain.

JA and the History Behind Japanese Agriculture Co-ops

If you’re in any way involved in agriculture in Japan, you can’t ignore the first links in the chain. That would be the relationship between Japanese farmers and the national farm co-op. Farming in Japan is dominated by one major co-operative called Japan Agriculture (JA). JA dictates the growing methods the farmers will use and in return, they will help the farmer sell their harvest by going through their distribution channels.

Agriculture co-ops were formed in Japan after World War II to allow the government to purchase rice from farmers during the food shortages. These co-ops were granted the extraordinary power to do banking as well as control various aspects of farming. This allowed the co-ops to loan money to people to start farms and grow the food that was needed to rebuild Japan. As the co-ops grew, they were granted more powers by the government including the ability to provide life insurance and property insurance.

As you can see in the diagram below, the JA Group is split into four different divisions. The “Guidance” division handles the centralized management of JA, “marketing and purchasing” handles distribution of harvested goods, and the other two divisions deal with banking and insurance. Incidentally, the bulk of the money made by JA comes from the banking and insurance arms, where they provide regular (non-agriculture related) home loans to consumers as well as home insurance policies. 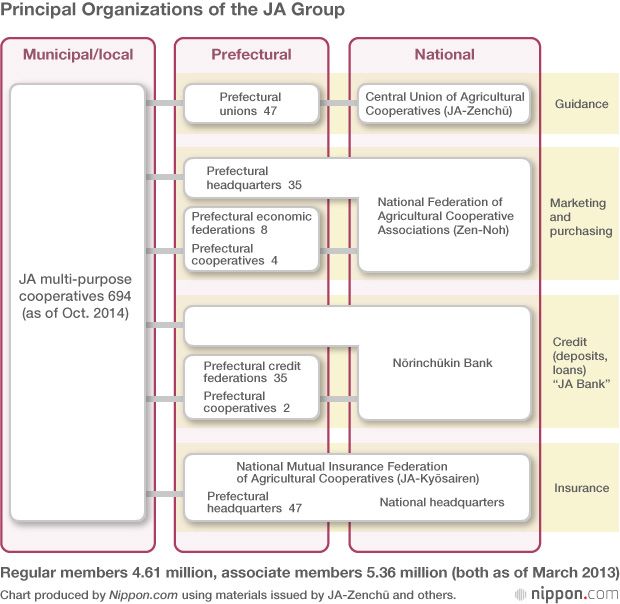 The local co-ops weren’t organizations that were independently controlled by their members though. They were centralized in a top-down hierarchy under one head bureaucracy called the Central Union of Agricultual Cooperatives, Japan Agriculture Zen-Chuu. 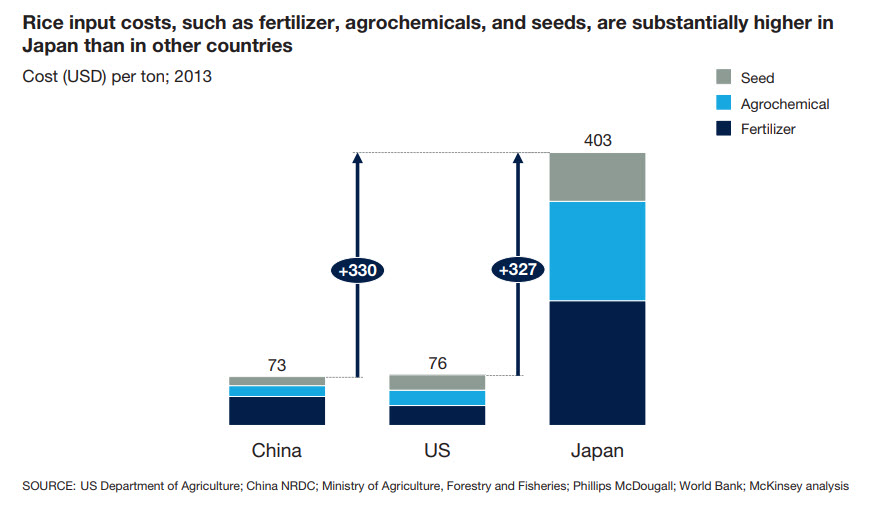 JA lays out policy on how food should be farmed which the farmers adhere to. If they follow the procedures laid out in their guidelines, using the fertilizers, pesticides, seeds, and machinery they dictate, the farmers are rewarded by being able to sell their produce into the JA distribution chain. JA also sells the fertilizers, pesticides, seeds, and machinery to the farmers, often at prices exceeding what they could be purchased at in other countries. This is one of the reasons Japanese produce is more expensive to grow than overseas counterparts and ultimately why it’s more expensive in the supermarkets. Due to the special status of JA, they are exempt from Japanese antitrust laws. Unsurprisingly, they are also one of the most powerful lobbying groups in Japan and many politicians need their support if they hope to be elected.

When the produce is harvested, the farmers store it at local JA warehouses. Because JA has many connections to the various wholesale markets around Japan, produce wholesalers will pick up the produce from the warehouses and move it to these markets. The farmer gets paid after they’re produce is sold, which is also known as consignment. This also means that if the produce does not get sold, they farmer will not get paid for the produce, an unfortunate byproduct of consignment, where the producer assumes all the risk.

In a normal consignment scenario, like if you sold a widget to a retailer like Wal-Mart, if it doesn’t get sold, the widget will get returned at the expense of the manufacturer. Since produce is a perishable product with a short shelf life, if the product does not get sold, it will likely be out of date so having it returned either means selling it to local consumers at a discount, or finding a broker to buy produce near its spoilage date at a heavy discount. Generally, it turns into a loss for the farmer who is taking on the bulk of the risk by paying upfront to grow all the produce. Selling through JA gives them access to more purchasers and distribution, but JA will also take a commission on the sale along with the commissions and margin on the costs of the inputs it sells to the farmers.

The diagram below shows the distribution chain for “ffv” or fresh fruit and vegetables in Japan. There are up to five steps to the consumer from the farmer, with each step requiring additional cost. 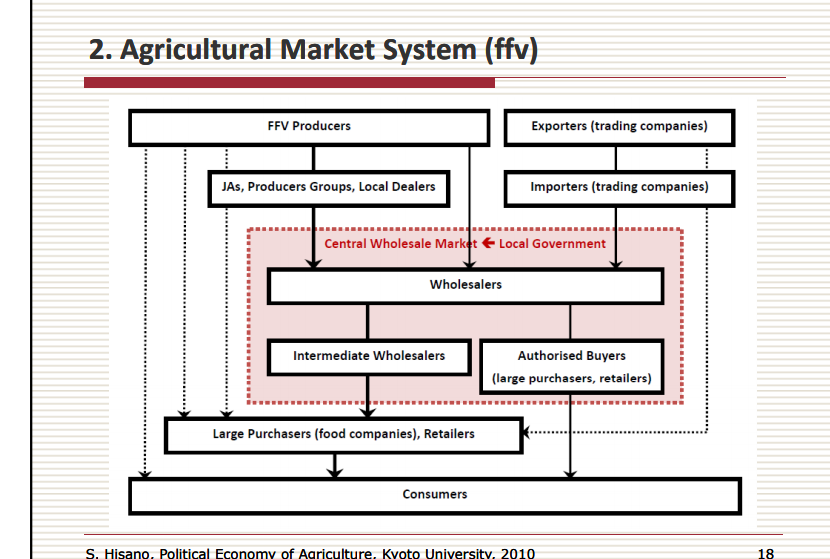 The farmer is at the bottom of the food chain as the producer. Once the produce is harvested, it goes to a JA warehouse for distribution. From there, it gets picked up by wholesalers to go to the local wholesale markets. At the wholesale market, the produce gets auctioned off to intermediary wholesalers and authorized purchasers that cater to large retail chains or food outlets. Once the produce gets auctioned off, the first payment occurs. At this point, the wholesaler gets a commission, JA gets a commission, and the farmer receives the balance.

From there, the intermediate wholesaler will sell the produce to other purchasers which will distribute it to all types of stores from small fruit shops to large retail outlets. Finally, they’ll be purchased by the consumer where another payment changes hands. At this point, the intermediate wholesaler gets a commission, the distributor gets a commission, and the retailer takes the remaining balance.

Going through this complete chain usually inflates the price by around 5x to  10x of the original cost to produce the vegetables. In general, the farmer gets around 15% to 20% of the retail price of anything you buy at the supermarket. The remaining balance goes to support all the intermediary people involved in getting the produce to market. An example of the cost breakdown can be seen in the graphic above. In contrast, for countries like Australia there is usually only one intermediary between the farmer and the retailer, resulting in a leaner supply chain and lower cost fresh produce.

Opening Up to Trade Treaties

In many ways, the current methods of distribution in Japan, not just JA, are to blame for the high prices of fresh food and non-competitiveness of the industry. Also heavy price protections and import restrictions have protected market inefficiencies which keeps produce costs high. Historically other countries had a difficult time selling lower cost produce into the Japanese market.

All of that is changing though with the many trade treaties Japan has ratified lately. The Comprehensive and Progressive Agreement for TransPacific Partnership (aka TPP v2) , ratified in 2018, has opened up Japan to imports of produce from other member countries. This has already resulted in low cost Australian rice becoming available at supermarkets, often at half the price of Japanese rice. Japan has also struck a large trade deal with the EU in a treaty nicknamed “Cars for Cheese” which went into effect from March 2019. This opens up Japan to low cost dairy products and meats from the EU. With trade deals like this happening, the status quo is rapidly changing for the farmer in Japan and 2019 may be the first year we start to see what the effects will be.

The Future of Farming in Japan

In Japan, agriculture is often handled by farmers as a side job or as a retirement activity. The majority of produce farmers also have other sources of income, often social security pensions or a second job. Since they’re not completely reliant on growing as a means of income, they’re generally willing to accept the status quo which is going through JA. Since guidelines are already laid out for them, as long as they follow it, they can make some kind of return on their investment. It’s also no mistake that fruit and vegetable farmers are skewing older. It’s seen as very hard work for little money for younger people looking for a means to financially sustain themselves. 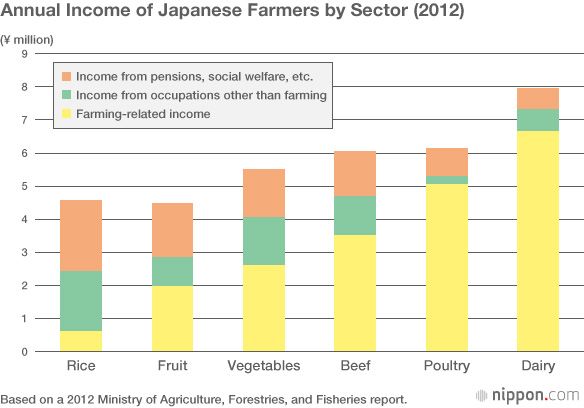 For older Japanese farmers to survive, younger farmers to come into the industry, and everyone to make a financially sustainable living, they will need to start doing more direct sales and cutting out the layers of distribution. By doing that, they can increase their sales price and still stay competitive with pricing from distributors who need to pad their prices with additional margins to pay everyone in the distribution chain. Selling direct is more difficult since farmers will need to their own marketing, sales, and also justify why a retailer, restaurant, or even a customer should do business with someone who can only offer a single or small selection of produce versus a distributor with a full portfolio. Differentiation through growing methods, ie: organic, biodynamic, macrobiotic, traditional Japanese farming, and having good stories and media documentation behind them, ie: farm-to-table restaurants that cater to food-origin conscious consumers, will also improve the ability for farmers to sell direct. 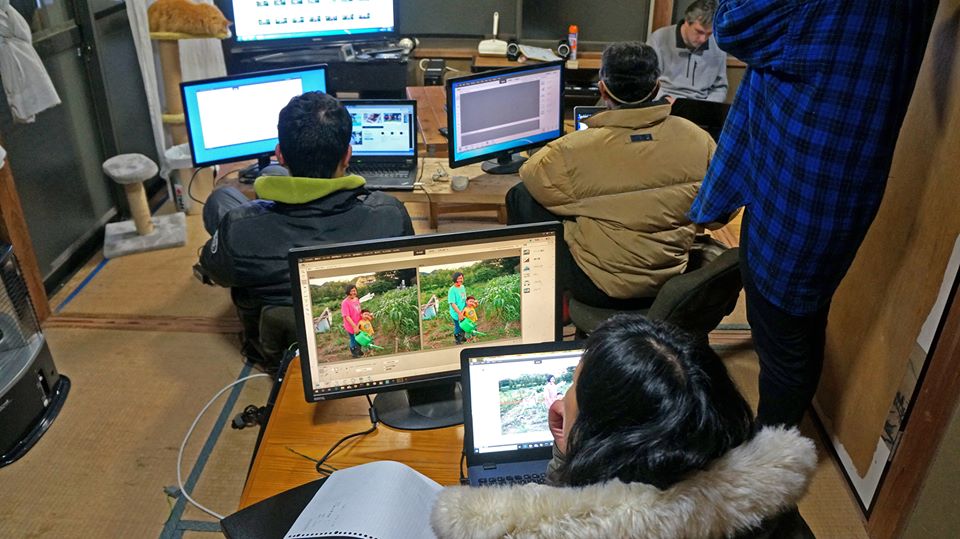 At Hackerfarm, our FarmLab project caters to experimenting not only with growing food, but how to grow food commercially for direct sales. We’re not only looking into growing techniques, but also packaging techniques, printing techniques, basic business skills, and having workshops and classes on media technology using Adobe tools like Photoshop, Premiere, and Illustrator. We think the future of farming for indie and organic farms doesn’t lie in agriculture robotics or imaging drones, but rather more fundamental technology that can help them with marketing, communications, and direct sales. A lot of the tech industry is focused on helping farmers cut costs, but we think that to make farming financially viable, it’s important for farmers to increase revenue. Cutting out layers of distribution, creating their own sales channels, and improving their marketing and branding are the fastest and most obvious ways to improve the financial viability of farming.

4 Replies to “The Food Chain: Japanese Agriculture – From Farm to Supermarket”