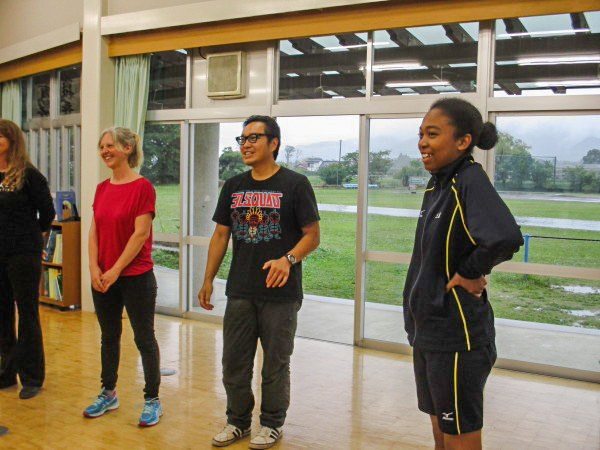 It’s been more than a decade and a half since I last danced professionally and about six years since I moved to the countryside to try my hand at agriculture. Little did I know that my dance past would come back to haunt me in the form of Ark, one of the youngest Hackerfarm members at 14, asking us to teach dance at her junior high school. My first instinct was panic, which turned to fear, which turned to indecisiveness as seemingly random emotions welled up inside me. My partner Jacinta eventually convinced me to go along with the project in collaboration with other hackerfarm members who would help manage, choreograph, and set up rehearsals.

When I was a professional dancer, I just remembered constantly pushing myself to practice more and more, improving technique, learning new styles, and also pushing the other dancers in my dance crew. We were a professional  crew that did hip hop dance videos, concerts, and special events. Dance wasn’t just a hobby, it wasn’t even a way of life. It was what personally defined me. I found it hard to separate me from my dancing and I eventually burned out after I started questioning what the purpose of it all was.

It was hard for me to associate dance with fun since it was taken so seriously by me, my dance crew, and other people we knew in the community. So when Ark had asked Hackerfarm about teaching a dance class to the local junior high school, it triggered a flood of emotions that mentally hijacked me, and brought back memories of long practices, stressful rehearsals, tense moments, and clashing egos. Luckily everyone else was totally fine with it, where I had become an emotional wreck.

I hesitantly agreed to participate in the dance class with the stipulation that I would just be the assistant and Ark would be the main teacher in the class. It was her first time teaching dance and also being the leader of a large group so we had prep meetings the night before each class where we would all brainstorm, pre-choreograph, learn the moves, and anticipate any problems.

To my surprise, it turned out to be one of the best experiences I’ve had all year. It was light-hearted, we joked around, I made mistakes, others made mistakes, we laughed a lot, and it was a covert way to get  alot of the kids in the class who didn’t like sports to actually enjoy a physical activity.  Having Ark lead the class was a great decision we all made because she became strong and confident as the class went on and all the students respected her as the leader. It was hard to see that the girl who, at the beginning of the series, would timidly count off the start of the routine, “5, 6, 7, 8…”, was the same one that would bellow it out by the last class. She commanded the respect of not only her teachers who joined the class but also the vice principal who she had grinding his hips to the latest pop songs with her yelling to channel his “inner diva”.

The class was a huge success and the teachers and vice principal were curious about setting up something similar every year. Unfortunately this was Ark’s last year of junior high school  and she’d be going to a different school next year. This experience made me realize that I needed to let go of parts of my past, get out of my head, and just dance with abandon. Somewhere along the line, I lost sight of how fun it was just to move my body, even in silly ways. Now I’m thinking to start dancing more, and perhaps take on some Latin dancing with my partner Jacinta.

The dance class was popular enough at the school that it ended up on the front page of the Nagasa Junior High school blog. It was really touching and we all had such a great time 🙂

You can see the blog post at the junior high school here.

Recently I had the great pleasure to attend my first Awamoney meeting. Awamoney is a …