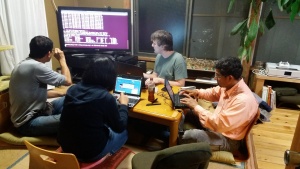 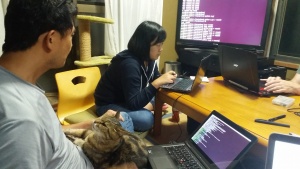 At the last python workshop there was an interesting reaction: “I love the command line, it makes you feel like a hackerz, I wish I knew more about it”. So we did a class. Actually that is a good extension to any programming class as trying to program without at least some notions of command line is much harder.

Several people came. Adrian wants to do some data science and it can really help to pipe a few text tools together to clean up a few data files. Noriko wanted to extract more power from the linux on her laptop. Jacintha (taking pictures) was really excited at the networking tools. Masa, the unix veteran, did not learn new things (except that on modern Ubuntu you can now delete non-empty folders without the -f flag) but came to help. Yves enjoyed teaching that group.

Oh, and the cat that joined us is actually named Unix. He enjoyed it too.

Yves Quemener is a software engineer that specializes in AI, machine learning, and robotics and worked in several fields including complex systems simulation and augmented reality. He runs the FaeBot project at hackerfarm, an open source, pulley-based, cable-bot for agriculture automation. He is also the default game master for all things board games at hackerfarm.

A company born from the hackerfarm: Lazy Dot Mania

The story of how a hackermom started a LED design company in the middle of the ricefields.