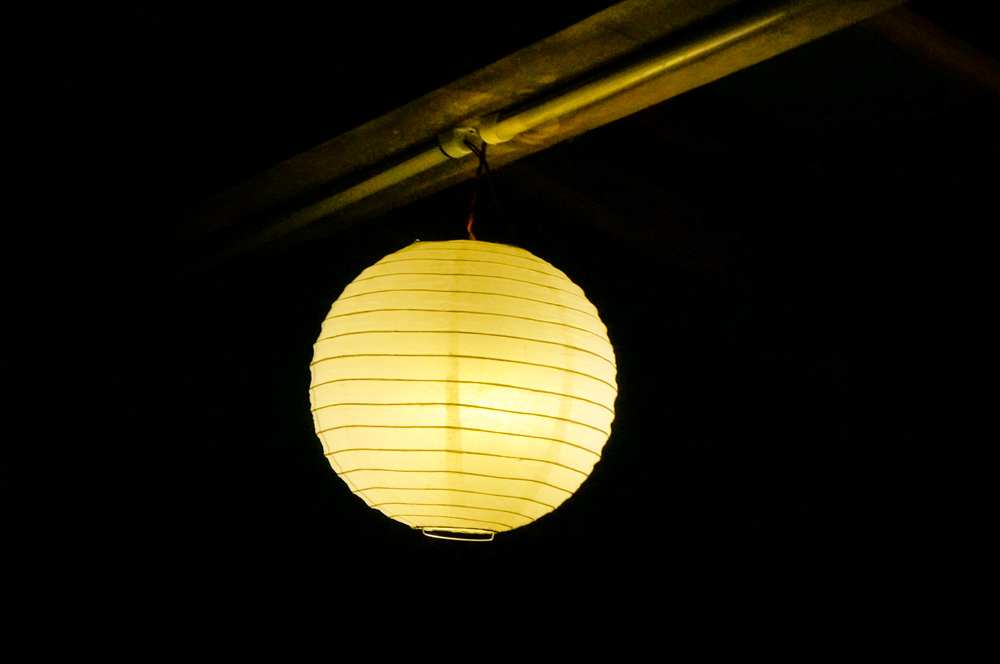 ” I was in Japan during the horrible earthquake in 2011 … I remember when the rolling blackouts hit and the neighborhoods were completely dark. During the evening, all I had to provide light was the Kimono solar lantern I designed for a friend in Tokyo Hackerspace.

Here at HackerFarm in Japan, we’ve experienced what it’s like to have no electricity and lights. We’re not rich and we’re not a huge aid agency, but the least we can do is provide our solar lanterns to people in Puerto Rico to give them some light, every night.

So we’re donating our solar lanterns. We’ve already fundraised enough for the first 50 solar lanterns which will be shipped out within this week. Our goal is to send at least 100 solar lanterns to Puerto Rico, and more if possible. We’re working with personal contacts in the US and on the ground in Puerto Rico to distribute them and make sure they get where they need to be.

If you’d like to help us send solar lanterns to Puerto Rico, please purchase the Hackerfarm Kimono Paper Lanterns at the FreakLabs shop. For every paper lantern we sell, we’ll be using the proceeds to send another lantern out to Puerto Rico.

A big thank you to people from the meetups & workshops we ran last week for their generous donations.

Jose, our guy on the ground in Puerto Rico, has been hard at work distributing lanterns. He just sent us pictures from Puerto Rico of the lanterns being put to good use. They’ve been going to families in rural parts of Puerto Rico that have been without power for over a month. We will be making another shipment out to Puerto Rico tomorrow and start sending parts to Puerto Rico so the lanterns can be locally made by people that can directly benefit from them. Thanks everyone for making it happen. This project is far from over 🙂

Thank you all for the overwhelming response. We ran into some part shortages for the lanterns such as the solar panels and circuit boards and had them express shipped to us from China. We’re back on track and are working hard to get another shipment out this week. We’ll also be trying to organize a soldering party at some hackerspaces in California when we visit there later in November. Now, we’re planning the transition from sending lanterns to Puerto Rico to sending parts out there. The idea is to slowly move the production and assembly locally to Puerto Rico so volunteers on the ground can teach how to make the lanterns and perhaps earn a living from them. This project has been amazing so far and we have the pleasure of working with the most wonderful people 🙂

First batch of 50 lanterns arrived in San Juan, Puerto Rico. Here they are getting charged up. They’ll be distributed soon with more pics on the way 🙂 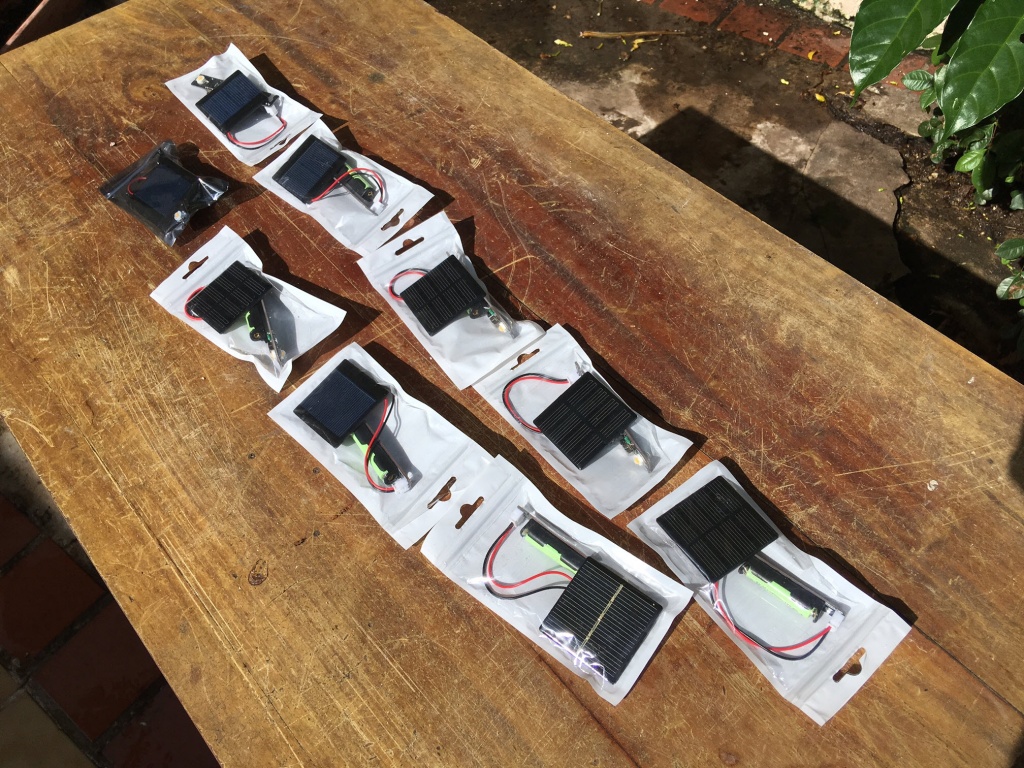 Thank you for such an outpouring of support! This post got picked up by Hackaday and was also shared by many on Facebook and Twitter. We’ve just shipped our first 50 lanterns to our friend in San Juan, Puerto Rico. We’ve also sold another 23 lanterns so far and HackerFarm will match those lantern sales to ship the second batch of 50 next week. Thanks so much for your support and we’ll keep everyone updated on the progress of the lanterns as they get to Puerto Rico.

The Story Behind The Project

Two weeks ago, Jacinta and I were in Shenzhen, China checking out some factories when we heard about Hurricane Maria devastating Puerto Rico. Not only that, but it was shocking to hear that the whole country could be without power for four to six months. I was in Japan during the horrible earthquake in 2011 that caused the giant tsunami, Fukushima meltdown, and had to live through the water shortages, food scarcity, and rolling blackouts. Those times were horrible, when you realize the developed country you’re living in is just a facade, and you can quickly be reduced to living a life similar to undeveloped countries with poor infrastructure.

I remember when the rolling blackouts hit and the neighborhoods were completely dark. During the evening, all I had to provide light was the Kimono solar lantern I designed for a friend in Tokyo Hackerspace. At that time, I made up my mind that we would put together the solar lanterns and send them to the Tohoku region which was the region that got hit by the tsunami. They were completely without power and much worse off than I was at that time.

Since then, the Kimono lantern has gone on to many different iterations. They ended up in the hands of a womens’ group in a village in Rwanda where they would build and sell them to other villagers to learn how to start businesses. 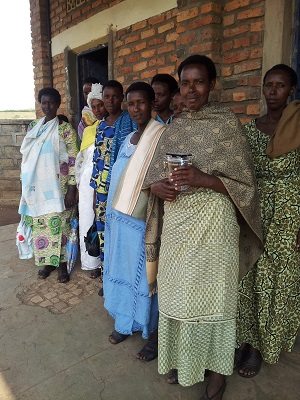 They also ended up in Dharamsala, India in the Himalayas as a way to teach the local Tibetan and Himachali Indian students about renewable energy, electronics, and repair culture. 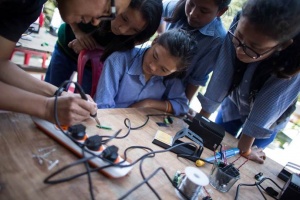 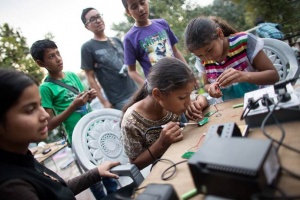 They’ve been used to teach young children how to solder and build their own toys and solar lanterns out here at our farm in the Japanese countryside. 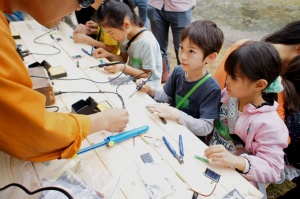 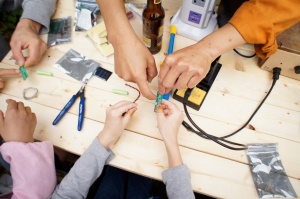 Light is a basic need and serves not only to bring people together, but to protect them from bad things that happen where nobody can see. This was the case in the Tong Len slums in Dharamsala, India where the solar lights were the only thing that protected the inhabitants from acts of violence and worse that occurred at night. 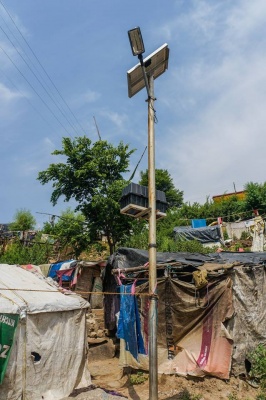 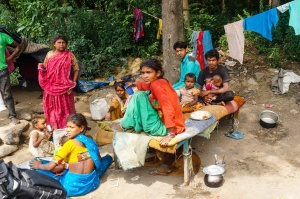 This is the latest version of the Kimono solar lantern design and adds a more powerful light source, larger solar panel, and a paper lantern as a light diffuser. 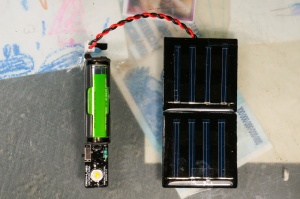 They can be put in paper lanterns, jars, plastic bottles or whatever is locally available. 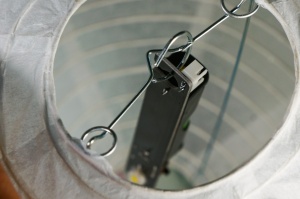 Here are some pics of Jacinta and I soldering up the first batch of solar lanterns. Unix the cat is overseeing production. 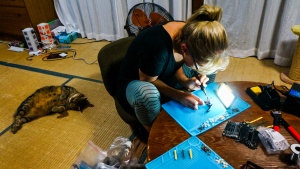 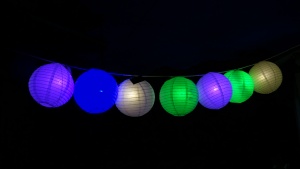 Thanks for your support 🙂

Full schematics and also gerbers of the Hackerfarm Solar Paper Lantern can be found here: