Autumn has come and the corn we planted earlier in August is finally ready to be picked. This is actually a special breed of corn, a traditional Mexican variety, and is non-sweet. The standard corn we find in Japan and also in the US is sweet corn which can be cooked and eaten (yum!). This variety is meant to be ground into corn flour which we’ll later be able to make tortillas out of. We also used this corn in our tamales which we made for our harvest party. 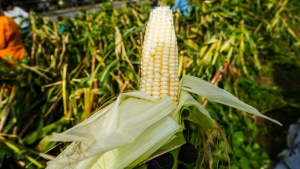 The story behind this harvest is actually quite interesting. Adrian actually had to go to a place in Narita, near the airport in Tokyo, where a seed specialist stockpiled a lot of different types of seeds. He had some traditional Mexican seeds for corn but wasn’t sure about giving them to us. Adrian would help out at his farm and kind of hint that he needed the seeds for the planting, but the message never got through. Finally, he asked directly if he could have the Mexican corn seeds. The guy smiled and handed him one cob of dried corn from that plant. From that cob, we were able to cultivate around 100 plants. The best corn cobs will be saved, dried, and kept for seeds for the next harvest. 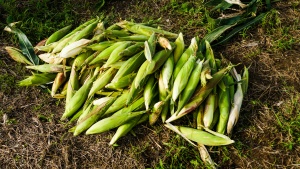 The method of planting is also extremely interesting. We planted these using a milpa technique so we could grow the crops completely organically. The method of growing is called “three sisters” which is a companion planting of corn, beans, and squash. The beans and squash are planted at the base of the corn and wrap around the corn stalks as the corn grows. This strengthens the corn stalks and prevents them from falling in the event of strong winds or typhoons. The beans are also nitrogen fixers and provides much needed nitrogen to the corn so it can grow well. The squash has broad leaves that provides ground cover and prevents weeds from growing. 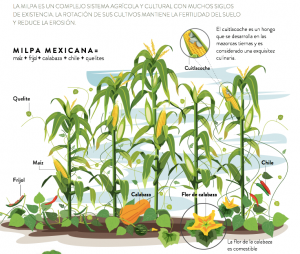 Growing these three together provides a balanced diet, keeps the soil fertile, and provides excellent harvests. This method of planting has been used throughout the Americas by the indigenous tribes and was the method of planting taught to the pilgrims from the Mayflower when they first landed on the continent. The bountiful harvest from this method of planting led to the first Thanksgiving which is the approximate time when you harvest these crops in North America. So for our harvest party, I called it our “little Thanksgiving” 🙂

Now that the Thanksgiving holiday is upon us in the US, it’d be nice to …

There used to be a comedian that would tell jokes about living in the countryside, …