The FarmLab project at hackerfarm has had a surprising number of ripple effects. We never thought that growing food would entail a whole series of technology workshops, Tokyo meetups, product designs, and multimedia recordings. The latest FarmLab event we had was a data visualization workshop run by Yves Quemener using Python. We originally expected only three or four people to show up since it was specifically designed to teach how to visualize the data we’ve been collecting at FarmLab on the plants. However we had many more people than expected. 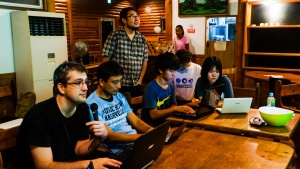 One of the really nice things was that we had people of all ages. Ages ranged from junior high schoolers to 60 years with even an 80 year old lady looking on. Another interesting thing was that just about everyone was using Linux or some Unix based OS (ie: Mac OSX). 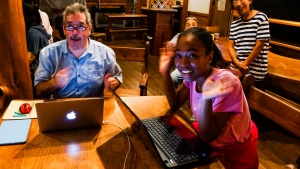 The workshop was taught as a follow along workshop using iPython Notebook which is a really handy tool to interactively write python code. It makes it really easy since you can see the results line by line and they show up immediately. Any problems can be seen quickly and corrected. Yves started out teaching python basics since many were new to the language. After the basics, the workshop goes through using the different python math and graphics libraries to scrub the data and generate the visualization.

This workshop occurred the day after the FarmLab wireless workshop where we learned about wireless communications and how to optimize for range. Who would have thought that trying to grow vegetables would yield a lot of workshop ideas and so much learning. 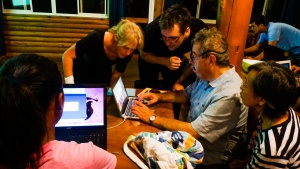