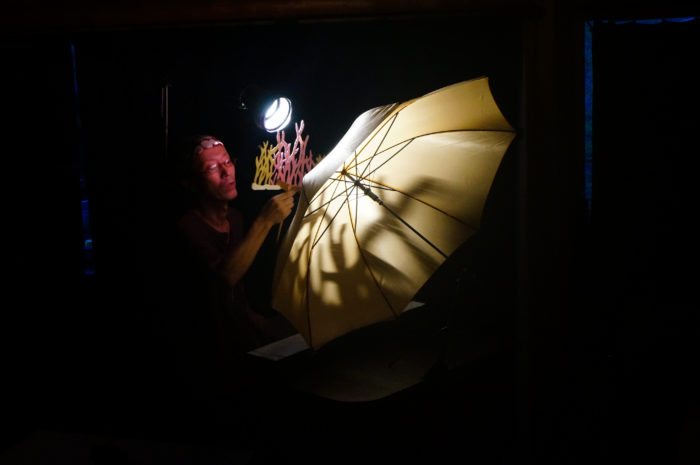 Awa Gathering is an event held by Hackerfarm every month as an excuse to bring people in the Boso Pensinsula in Chiba, Japan together. The area is large and spread out so it’s hard for people to get to know each other and see what others are doing. The event happens at our cafe, Satoyama Design Factory, on the last Saturday (or sometimes Sunday) of the month. It’s a way for us to reach out to the larger local community and also allows us to meet tons of interesting people doing extremely amazing work in the area.

Kozuka Art Village is an artist collective that resides on the hill behind hackerfarm. Every year, they hold the Kozuka Art Festival which is a growing festival that attracts a large audience to the area. Recently, we’ve been working with them on some of the event planning and opening up our cafe for the art festival events. It just so happened that they were planning a double header puppet show so we decided to feature the puppet shows at Awa Gathering #4 which occurred during the Kozuka Art Festival in July. 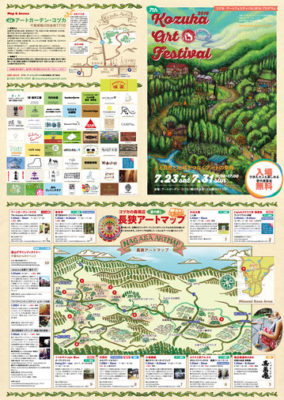 We have a BBQ for every Awa Gathering (weather permitting) and it’s a free event where everyone brings their own food. We decided to start the BBQ a bit early for this one to give people a chance to eat before the shows started. We knew that once things started, there wouldn’t be a chance to eat for about two hours. We were a bit concerned heading into 5 pm since there weren’t many people there. The show officially started at 6:30 pm and it would have been a shame if there was a small audience for such wonderful pieces. However, the worry wasn’t needed. Around 6 pm, people started arriving in droves and it turned into a standing room only house. We had to sit people up in the loft because we reached maximum capacity. 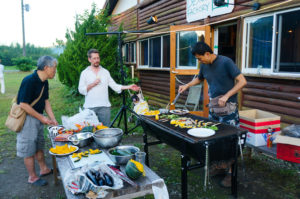 The puppet show was a double feature which had two different puppet troupes with two distinct styles. The striking thing is that both puppet troupes had live music and sound effects. They required quite a bit of a supporting cast to handle the music, lighting, storytelling, and puppet control. It was amazing watching both shows and realizing the amount of effort and love that goes into crafting the handmade puppets and putting together the stories, scripts, props, and music.

Here are some pics of the setup for the first show. We were expecting a big crowd and prepared floor space. The puppet troupe also wanted the kids to sit close to the puppet stage since it was all shown on a standard size umbrella. The shadow puppets were handmade using a Balinese shadow puppet technique and composed of intricately cut paper shapes. 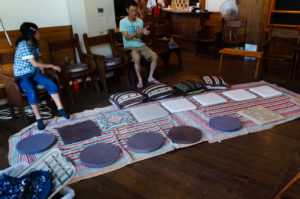 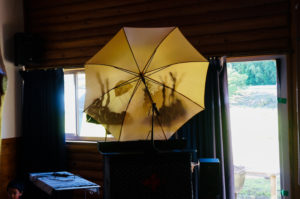 The first puppet show was a story about a jellyfish and used a fusion of Balinese shadow puppetry and Japanese storytelling technique. The puppet master handled the puppet control himself and used a backlit umbrella to cast the shadows for the show. The effect was mesmerizing and the children were completely absorbed in the story. 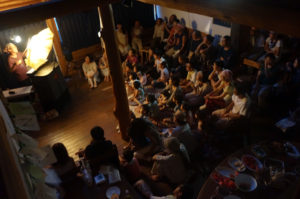 I was in awe of the puppet master since he was able to control the puppets, tell the story, and sing while his wife and son were playing the instruments. It was really beautiful to see the show being performed as a family. 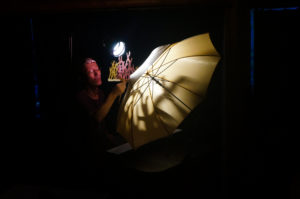 The next group that performed was an all female theater troupe that does acting and theatrical performances as well as puppetry. They also performed shadow puppetry using an overhead projector and a screen. They also created their own paper cutouts of all the puppets with intricate decorations and gaps colored with cellophane. It created beautiful effects on the screen. 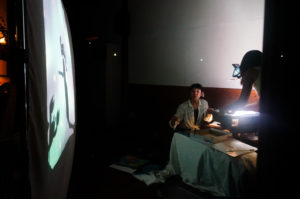 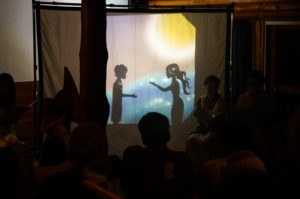 Since they were a full theatrical troupe, the performance also included choral singing, live harp, and dancing. It was really a full ensemble for the show and the kids loved it. 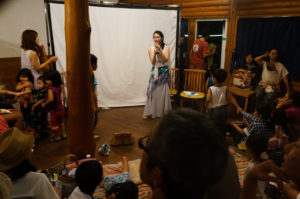 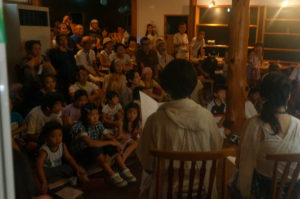 Once the show wrapped up, the parents took the kids home and the rest of us ended up firing up the BBQ grill again and had a small celebration. It was a crazy event that packed our cafe literally floor to ceiling so alot of us were exhausted by the end. It was a great experience though and I’m now extremely interested in puppetry, especially shadow puppetry. I think there might be some interesting things that can be done in the area of puppet show technology. 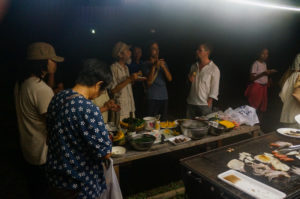